It is an early start today; I am picking up John and his wife along with their two traveling companions from the Waldorf Astoria Hotel situated right on Lothian Road near the corner of Princes Street in the heart of the city of Edinburgh. It is a fantastic location to stay if you like shopping and fine dining. It is also very central if you wish to explore all that Edinburgh has to offer. Edinburgh is a very central locations for visiting other parts of Scotland easily.

Our route today is taking us north through Lothian into the Kingdom of Fife, then onto Perthshire before returning through Stirlingshire and back to Edinburgh.

Traffic dependent, our first stop will be around nine miles from departure at the beautiful little town of South Queensferry so called because it lies on the south side of the Firth of Forth. On the other side of the water, we have North Queensferry. In 1627 Charles the First erected the town into a Royal Burgh and freeport. The towns prosperity at this time is still evident in the number of 17th century buildings which still survive today. The history of South Queensferry is much older than this, Queen Margaret, wife of Malcolm lll established a ferry service operated by Carmelite monks for pilgrims travelling north to St Andrews in the 11th Century. Today, South Queensferry is nestled between three iconic bridges. The Forth Bridge opened in 1869 to transport rail passengers between Edinburgh and the north. The Forth Road Bridge opened in 1964 by Her Majesty Queen Elizabeth ll. The latest bridge is The Queens Crossing which opened in August 2017.

A few hundred metres walk, photo’s taken and coffee and cakes on board we are now heading over The Queens Crossing into the Kingdom of Fife, en route to Crieff in Perthshire where we visit our first distillery of the day. Our drive up is scenic all the way driving through rolling countryside, passing the grand Ochil Hills. We pass through Loch Leven where Mary Queen of Scots was imprisoned in 1567. She escaped the following year and fled to England only to be re-incarcerated before being be-headed in 1587.

We continue north through Dunning Glen, then we bypass Auchterarder home to the famous Gleneagles Hotel and resort. Gleneagles was home to the Ryder Cup in 2014.

We arrive at the Glen Turret distillery on the outskirts of Crieff and we just have enough time for another cup of coffee before the tour begins. This distillery, dating from 1775 is one of the oldest distilleries on Scotland and still produces Malt Whisky distilled the way it was over 200 years ago. I have only ever had rave reviews from the many clients I have taken to the distillery for a tour and I am hoping that today will be no different. When John and his party return to the vehicle the general opinion is that the tour was very professionally conducted, informative but the best part was the tasting. The only problem I generally encounter is trying to get the clients to leave the distillery tasting room. That’s why each tour is very different and can be quite challenging from a time schedule perspective. 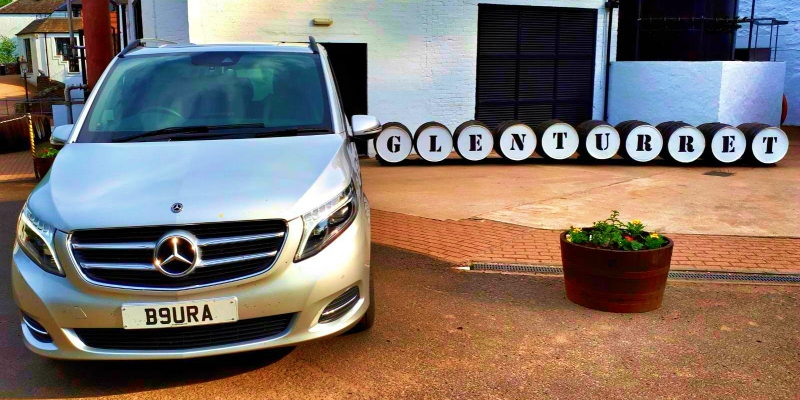 Party on board and we are now heading towards Callander for a spot of lunch. Our route today takes us through the pretty little village of St Fillans which runs along the banks of Loch Earn. At the end of the loch, we turn left taking us back towards Stirling. A few miles down the road we encounter Loch Lubniag which we drive alongside almost all the way to Callander. Just outside Callander we stop at a little place called Kilmahog to take pictures of Hamish the Hairy Highland Coo who poses with his wife and his calf.

Today we are eating at a local hotel set in its own grounds with private gardens that end at the banks of the lovely River Teith. It is the most beautiful setting and is very popular with weddings and private functions. This hotel is definitely in my top five for this area. My clients had asked in advance for a lunch recommendation and after providing several venues and correspondence via e-mail this was the venue of their choice.

Lunch over and a “thank you” for the recommendation (I’m just happy they enjoyed it) we are off to our second distillery of the day but not before my clients spend a little time exploring the traditional Scottish shops dotted along the main street in Callander for some Scottish souvenirs.

Our next stop is Deanston distillery which is unusual in more than one way. It started out life as a cotton mill in 1785. The small village of Deanston was built around the mill to accommodate the growing workforce required at the mill. It is located on the River Teith and the entire Mill/Distillery is powered by electric turbines drawing water from the river. In 1965, due to a decline in the cotton Industry the mill closed its doors. The mill was then converted to a distillery and in 1974 the first bottle of Highland Scotch Whisky was produced. The rest is history. 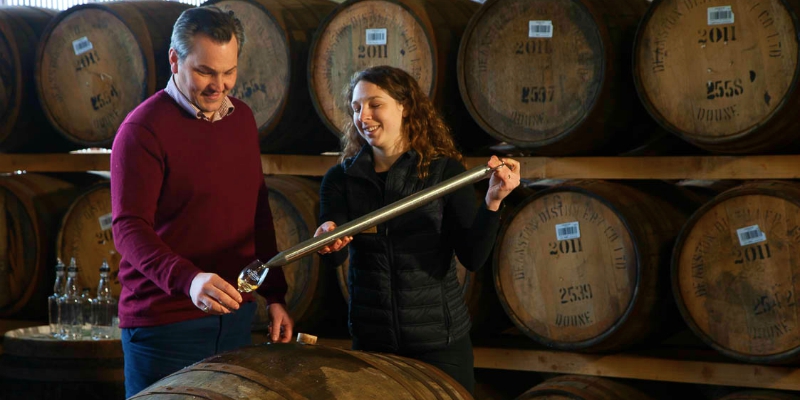 It is at this point a usually ask my clients to give me their opinion as to which of the two distilleries was their favourite. The answers vary but I would like to get your opinion on them if we ever meet.

Tour completed and the sound of clinking bottles stowed safely in the vehicle we prepare to make our way back to Edinburgh. However, as time allows, we have the option of one more quick stop before my clients have to return to their hotel for a pre-arranged dinner engagement.

We can either go to Doune Castle made famous by Monty Pythons “The Holy Grail”, Game of Thrones and later Outlander or Stirling Castle where Mary Queen of Scots was Crowned queen at the age of nine months old. John and his party opted for Stirling Castle. Upon arrival at Stirling Castle, we have time for a quick photo opportunity on the esplanade with its unrivalled views over Carse of Stirling and the Wallace Monument rising majestically in the background. We can see the River Forth winding its way round Stirling and all the way back to the North Sea. 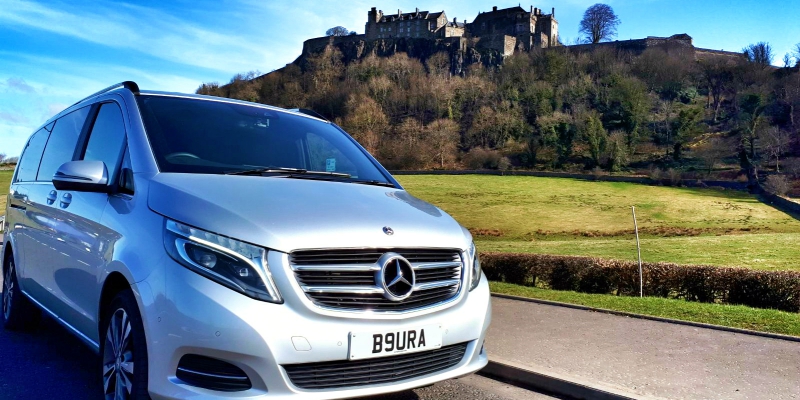 We proceed along the M9 passing the Statues of the Kelpies, 30-metre-high horses (shape shifting water spirits) designed by Glaswegian sculpture Andy Scott. Further along we pass Linlithgow Place, the birthplace of Mary Queen of Scots. 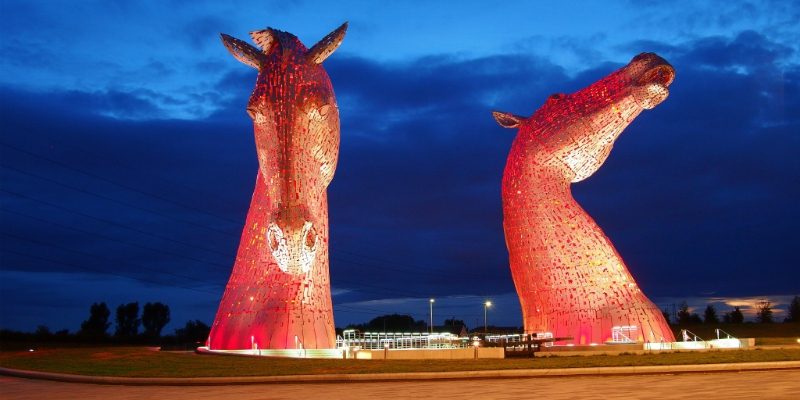 All too soon we are winding our way through the streets of Edinburgh and return to our starting point on the corner of Princes Street.

A shake of hands, a few hugs and fond farewells and my clients are off for a well-deserved dinner.

I am off home for a wee dram.

Looking forward to Seeing you all next trip.